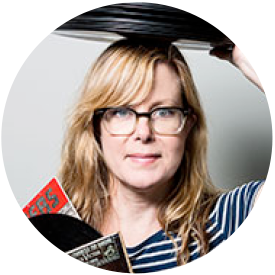 Dawn Johnson grew up in Austin, Texas. After graduating from the University of Texas with a double major in Government and Philosophy, she stumbled into filmmaking when a friend asked her to produce a documentary he was making with Rick Linklater. After that she knew she’d found her calling in life. Her second feature documentary was an ITVS funded documentary called “Nuclear Family” which aired on numerous PBS stations nationwide. After a short stint in Los Angeles production managing for television series, she knew she had to get back to her hometown of Austin. (There is no such thing as queso in LA!) Since then she has been producing and directing feature and short documentaries, television series, and commercials. Her work as Producer/Director on the KLRU series “Downtown” earned her three Lone Star Emmys. She helped produce Margaret Brown’s award winning film “Be Here To Love Me: A Film About Townes Van Zandt”. She was the lead Field Producer for the A&E series “Heavy”, and recently produced a pilot for The National Geographic Channel about Tourette’s Syndrome. She worked with Arts + Labor as the producer of their film “Outside Industry” about the history of the South By Southwest music conference. She produced “Sir Doug and the Genuine Texas Cosmic Groove” about the legendary cosmic cowboy Doug Sahm, which premiered at the 2015 SXSW Film Festival.